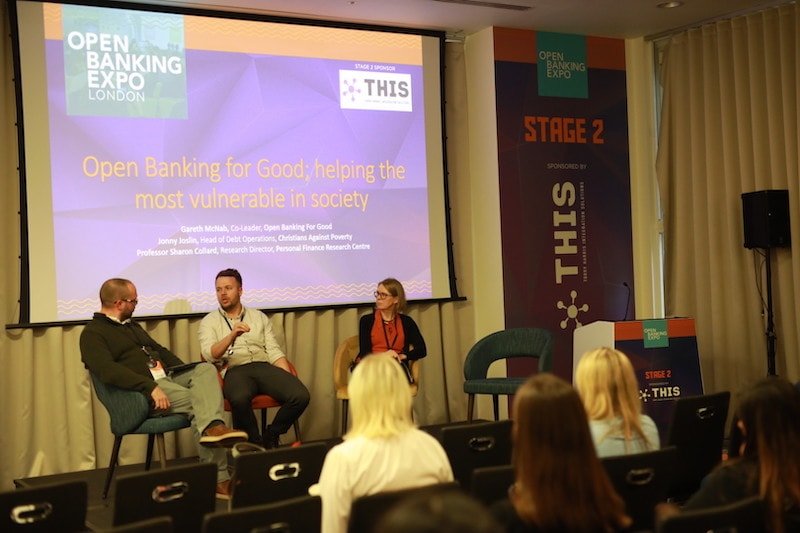 Collaboration is key to inclusivity in Open Banking

The financial services sector must collaborate with charities and other organisations to ensure Open Banking works for all areas of society, according to panellists at the Open Banking Expo 2019.

Open Banking for Good (OB4G), a project set up by Nationwide in 2018, has forged partnerships between fintech providers and charities focused on financial wellbeing and debt management in an effort to improve outcomes for the “financially squeezed”.

Gareth McNab, co-leader of OB4G, explained: “Our research suggests there are 12.7m people that are financially squeezed. It’s not necessarily about being one poor decision away from difficulty, but being one life event away from serious financial difficulty…

“Left to its own devices, Open Banking will help people with money and choices get access to more money and more choices, and the gap will get wider. We have to foster and curate Open Banking so that it benefits everyone.”

McNab emphasised that the solution was not better marketing or education around Open Banking. If a customer did not have enough money in their account, he argued, it would not matter what their banking app or website looked like.

“If we get enough consumer-facing use cases of Open Banking, we won’t need to get into what Open Banking actually is and why people should trust it,” he added.

In October last year OB4G launched a challenge to financial services companies and consumer groups to propose solutions to income, expenditure and money management issues faced by lower earners. The campaign attracted more than 50 contributions, and a full report is expected by the end of 2019.

Sharon Collard, a professor at the University of Bristol and a research director at the Personal Finance Research Centre, helped review the OB4G challenge and its participants. She said it was important for companies seeking to address the “financially squeezed” consumers to work with charities and take these relationships seriously.

Collard said: “Right from the outset, before the [OB4G] challenge was launched, there was the idea that what we needed to do was to empathise with consumers, to understand what their problems were.

“The feedback from charity partners was that it was really important for them to be involved from ground level. Several of them had experience of being treated poorly by fintech in the past, but this time their expertise was being put to good use.”

She added that it was not enough to “retrofit” a product or service – companies had to work with this target audience “from the outset”.

Jonny Joslin, head of debt operations at charitable organisation Christians Against Poverty, said debt advice firms needed to be involved in Open Banking discussions to ensure the specific needs of their audience were properly taken into account.

“Charity partners can provide interesting input for fintech companies,” he added. “The outcomes from work with charities could be commercially viable, through a new angle or new solution.”