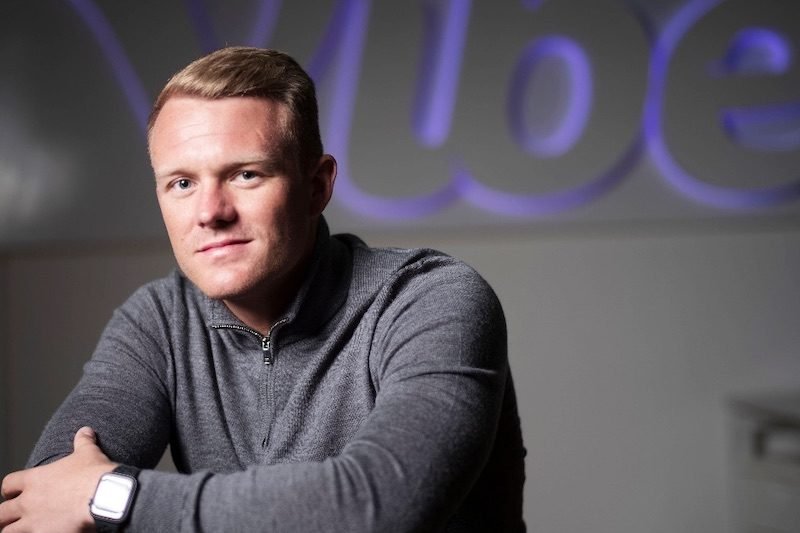 Open Banking Expo’s Ellie Duncan spoke to VibePay CEO Luke Massie about the need to add value to the payments experience, and why he is on a mission to remove the middleman.

1. When you founded VibePay, what was your vision for the business?

VibePay was founded in 2018 and we launched the first version of the product in 2019. The idea for VibePay was born out of Vibe Tickets. We wanted to improve our own marketplace. For the same reason people were using Vibe Tickets to avoid the likes of Viagogo and StubHub, they started sharing bank details in the marketplace because they wanted to avoid PayPal’s fees, which was quite frustrating for us because people were leaving our marketplace to make transactions unsafely.

We used to joke about it in the office and say, ‘we know the buyer and we know the seller, one day we’ll own our own payments business’. At the time it was a bit of a dream because the technical barriers were so high. But then, in January 2018, legislation changed in Europe and PSD2 happened. Obviously, the banks had to open up their infrastructure which meant it was a possibility.

The idea was we wanted to provide more liquidity to people that were buying and selling on Vibe Tickets, that was the initial idea. But once we started to build VibePay, we realised there was a much bigger problem in payments itself and that VibePay could be more of a supporting user acquisition channel.

2. What is it that consumers and businesses want from their payments experiences and how is VibePay meeting those needs?

Payments is fast becoming a commodity. Moving money from A to B is no longer that difficult from both a technical perspective but also a legislation perspective. It’s now doable, you just need access to an API.

I think the majority of consumers and businesses are looking for more value around the [payments] experience itself. Moving the money cheaper and quicker is no longer a competitive advantage. We create post-transactional channels with people, so not only do we power your payment instantly and at the cheapest rate but then we also create a CRM within the VibePay app, so you can communicate with your customers after the transaction.

It’s on the verge of what we refer to internally as social commerce and VibePay is trying to be Europe’s answer to the likes of WeChat and Alipay in Asia, and also Cash App and Venmo in the US. We believe there’s a massive gap in Europe because of how fragmented it’s been but also because everyone is trying to build other wallets.

3. You have written on your blog about the move away from card rails, to account-to-account payments. What hurdles or challenges need to be overcome for this to happen?

The first thing is establishing value. Moving the money is just the start of it, what’s the value proposition? When you look at other providers in the space – whether it’s PayPal from the wallet perspective or whether it’s credit cards, for example, that offer a value proposition – I think the first thing is, what can a new payment provider on a different rail offer that isn’t already being offered?

In terms of the barriers, a lot of it is around the technical integration. So despite PSD2 coming in, which was a baseline for standardisation, a lot of the banks’ APIs vary in quality. Some of the legacy banks are doing the absolute bare minimum. Whereas some of the neobanks are really invested in the APIs because they understand that the user is just going to move banks otherwise. We’ve already started seeing many VibePay users get frustrated with legacy banks. Until the connectivity at the infrastructure layer gets better, it’s going to be hard to build a reliable product or service on top of it and that’s been VibePay’s biggest challenge over the past two years.

What I can say is that the market is young. We were one of the first products to market, legislation was only in 2018, so when you think about lifecycles we are right at the beginning of it. Then, in order for VibePay to offer account-to-account payments outside of the UK and support European markets – for example, a Spanish customer paying a UK customer – we obviously need connectivity across Europe. PSD2 has got that in its documentation but some of the banks are still yet to implement it, there are some challenges around that.

4. What developments are you working on at the moment as part of the VibePay ecosystem?

We’ve looked at our tech stack and we’ve started to work with other technical service providers, despite us having our own licences. So we’re using TrueLayer to do our PISP and AIS connectivity. Their reliability is much better than ours. In the early days, I spent the first couple of million quid I raised in building our own banking connectors and we realised pretty quickly that there were other service providers in Europe that were raising a lot more money than we were to solve that specific problem. We reached out to TrueLayer and swapped our own gateway out for their gateway. That gave us solid foundations to build on.

I think the [other] thing is to really focus on the UK. If you’d asked me two years ago, I would have said VibePay needs to grow across Europe really quickly. But that technically isn’t possible yet, so just having clarity around that go-to-market strategy has helped us over the last six months.

Also, there are the pressures from external VCs and investors who, when they look at the fintech space, they see products that are raising hundreds of millions at unicorn valuations, scaling across Europe pretty quickly. Then they look at something like Vibe which is building iteratively, listening to its community, really building solid foundations. And you can see how the low-hanging fruit or the dangling carrot for someone like me is to make a jump and try and launch something like buy now, pay later, where the market is really hot and where I could raise a lot more money than I am.

The number one request we get from the Vibe community is, ‘when can we start trading crypto on VibePay?’. But my response to the community is, there are other products out there that do that better than we ever can. We’re not just going to build another me-too. what we’re actually trying to do is create our own experience, which takes time and money so I’m glad I have the support that I do.

5. Can you tell us one thing that grates on you about the world of payments?

I think centralisation – any business model where a product or service is deliberately positioned to exploit either side is wrong. If you look at my mission as a founder throughout my career, although I’m still young, whether it was with Vibe Tickets or VibePay, is to remove the middle man. I think that’s why decentralised products are the way forward. If you can enable people to connect directly, then the experience on either side is going to be much better and more efficient because there isn’t a middleman taking extortionate fees just to justify their value proposition. I think we’re starting to see that.

When you look at the supply chain, the end consumer and the merchant are the most valuable people in the supply chain and, at the moment, I think the incentives are not aligned. The entity that is capturing most of the value at the moment in any supply chain is the middleman, which is completely wrong. The end consumer should be getting the most value, closely followed by whoever is serving them, which is the merchant. The person moving the money on the rails should be getting the least value out of it all, because the technical barriers are low and there’s no validation for it anymore. The world’s changed, but the pricing hasn’t.

6. How would you like the payments landscape to look in five years’ time?

I think it has to be real-time. And I would also like to see the financial business model for payments change. One of the things I tell investors now is I believe that payments is right on the verge of where the telcos industry was back in the 2000s. Telcos used to charge high transactional per SMS and per call models. Then, when the internet and voiceover IP came in, the telcos had to change their model because they knew they wouldn’t be able to justify those fees. They reverted to a monthly subscription model where you get all your calls, all your texts included as a bundle and they throw in hardware for you.

I think that’s exactly what’s happening right now with payments which is, at the moment, all we’ve ever known is if you’re selling something you get charged 3% by a middleman. But now Open Banking has come around and there’s an opportunity like VibePay, which is offering an alternative. If payments don’t revert to a £20 month ‘all your payments are included’ and you get additional value such as message customers around payments then people are going to avoid Visa and Mastercard. Visa and Mastercard are aware of this and that’s why they’re aggressively buying things at the infrastructure layer.

Where I see payments in five years, is that it’s actually a monthly subscription model.

VibePay Pro is going to be our solution. We want to help in-person sellers, online sellers and what we call social sellers have an online identity. VibePay Pro, which we’re hoping to launch later this year, will basically be a monthly subscription model. VibePay Pro will hopefully show the industry where it could go and I’m pretty confident that the uptake will be good. We’ve got a really strong community.