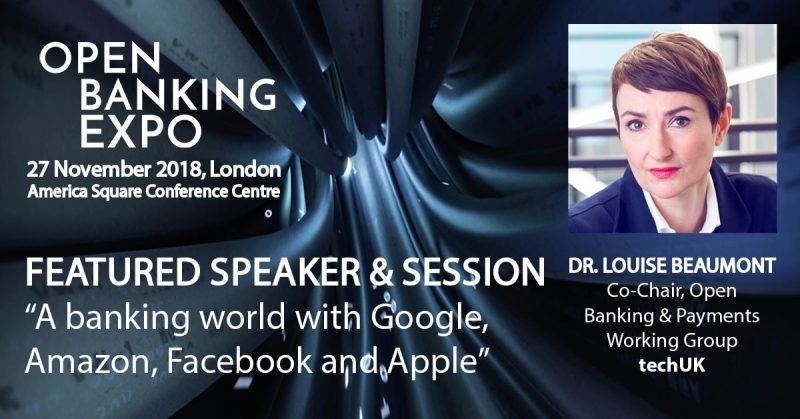 As a serial entrepreneur, regulatory adviser, corporate consultant and investor, Dr Louise Beaumont has seen the evolution of the banking sector from all angles. As co-chair of the Open Banking & Payments Working Group, techUK, she spoke to Open Banking Expo about the challenges facing the sector and who she predicts will be the eventual winners and losers…

Q:         What is your assessment of the changing banking landscape?

I think people are going to wake up to the fact that APIs are not the messiah. Rather, the liberation of data has a fundamentalset of implications for old-school business models.

Data enables predictive, pre-emptive services, hyper-personalised services – and smart companies have been focusing on large-scale acquisition of data. Payments data, for instance, gives you insight into where people spend their money, and a strong indication, therefore, as to what they care about.

There has also been a change in the competition landscape. After years of no competition, we started seeing new companies coming in. Tech titans around the world have started to offer services that the banks never even considered offering because it wasn’t what banks did. It’s like they had no peripheral vision whatsoever. They ignored people’s changing attitudes, behaviours and expectations, they ignored the advances in technology, and they ignored the changing competitive landscape.

Q:         What was the turning point that pushed banks to recognise a change was needed?

The competition authorities thought they were going to have to regulate, because if they didn’t, the banks were in danger, because they hadn’t paid any attention to any of these drivers.

The interesting thing is, when you regulate, you provoke the ‘anaphylactic shock compliance reaction.’ Banks have just become compliance machines. They react to regulation with compliance.

This ‘anaphylactic shock compliance reaction’ puts the compliance people in charge. As the name suggests, they know how to comply, but they don’t know how to be creative, and anyway they’re not in charge of the business model. They obey the letter of the law and argue the toss about the spirit. This reaction effectively excludes smaller organisations that haven’t got endless resource to participate.

Because the regulation stipulates “you will develop open APIs” not only do you have the compliance people involved but you multiply their effect by throwing in technologists. Technologists are even more literal-minded than compliance people. The technologists have had years of being ignored and marginalised within large banks. Now they have walloping great big budgets because they have to find data so they can serve it to customers, as they ask for it.

But a compliance plus technology reaction is missing the point by several light years. This is a really profound change, because it is putting data back into the control of the people – consumers and small businesses – that generate it, so they can use it in their own interest.

Q:         What are the implications of this on the competitive landscape?

Banks have traditionally been very dismissive of their competitors. They see their customers as hostages with a virulent case of Stockholm Syndrome. Tech titans don’t only have huge customer bases, but a more intimate knowledge of and relationship with those customers. Their customers also use a far broader range of services.

Another advantage they have is brand elasticity. Brand elasticity is important. It means you can port trust from one service to the next. Then there is the ability to talk and listen to individuals at scale, one to one.

Amazon Echo and all the voice activated technologies are great examples. They are talking to you and you are talking to them, one-to-one, and at scale. The tech titans think it is important to talk to people personally and have made a huge investment over a very long time to do just that. None of the big banks have the same capacity to talk to people individually, even through the branches which they are closing. And their brands are heritage and restrictive.

Q:        What other advantages do the tech titans have, in your opinion?

The ability to build a thriving ecosystem is critically important. The ecosystem is where innovators, service providers, technologists, etc. want to work with you, because the data you hold and the access you provide to it is the best. For these companies, their fantasy is to get a partnership with Google, Apple or Amazon, because they have great technology, great access to data and know how to work with smart innovators and suppliers. The world’s biggest, slowest moving, most arrogant organisations – like the traditional banks – are competing for the time and attention of the fastest moving innovators. It is not the other way around.

Q:         What do you see as the difference in shareholder expectations of the tech titans and the traditional banking organisations?

If you do a compare and contrast on broad diversity at the board and executive level of a big bank and, say, Amazon, it is really interesting, particularly if you look at three core measures of diversity – education, work experience and attitude to risk – where there’s a big difference. The board and top executives of big banks are educated in banking, finance, accounting and law. They have worked at banks, and accounting firms. They are company men – no entrepreneurs. And they understand banking as it has always been done.  Then you look at Amazon’s board and executive team, you see wide diversity in their education; a mix of arts and sciences. There is also a blend of work experience wide selection of sectors, with entrepreneurs and investors in the mix – plus their attitude to risk is entirely different.  They are creating the future we’re living in.

Take Amazon as an example – it has better data than the banks do on the small businesses trading through their platform; it understands their cash flows, it understands the peaks and troughs of their business, and it knows when to offer money, and at what rate. If you want to become a utility, you need to be able to provide Amazon the money it requires, to service its’ customers, when it decides.

If you look across the banking sector, it is a mixed ability class.  Not everybody is going to make it.