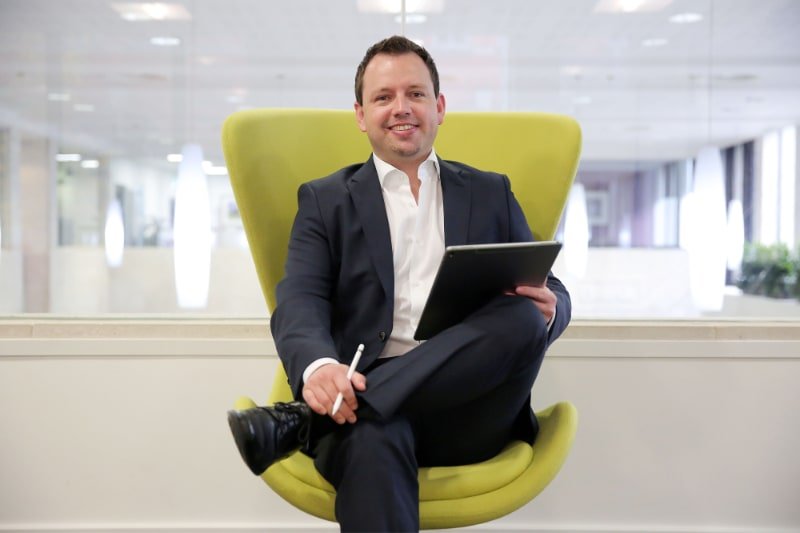 As competition between banks builds across the UK, Open Banking Magazine caught up with the man leading the FinTech charge for Danske Bank in Northern Ireland. Joe McGrath reports…

Initially, Danske Bank customers with a personal current account with Santander were able to view their balances and transactions from the other bank. Since then, work has started on rolling out the service to other banks throughout 2019.

The man driving much of the digital innovation for Danske Bank UK is chief digital officer Søren Rode Andreasen.

As the name suggests, Andreasen spent much of his career in Copenhagen, working for Danske Bank for more than a decade before moving to Belfast to take up the role of chief digital officer. For such a digital native, the cultural differences between the UK and the Danish financial services markets were notable.

But the slow and steady approach of traditional financial brands has been disrupted in recent years with regulations relating to Open Banking and the second Payment Services Directive (PSD2) stimulating innovation and forcing organisations to work more closely together.

For Danske Bank – one of the CMA9 – partnering with outside organisations is not a new thing, but Andreasen believes that the company’s innovation and experiences in other European markets can give the business the commercial advantage when it comes to seizing on the opportunities arising from Open Banking.

The UK digital boss says while widespread investment in technology throughout the sector has created the potential for lots of exciting new ideas in Open Banking, the continuing lack of consumer demand has held back creativity and led to lots of companies focussing on the same initiatives.

“We haven’t seen the real killer applications from a consumer perspective,” he explains. “I go around to all the co-working spaces, so I know what people are working on. It is often the same things again and again – all commodity products.

“There are around 50 ideas I see again and again. Not just here, but in other countries too. It’s all about providing consumers with a good overview of their finances. [In future] customers will just expect their bank to do this.”

If providing a consolidated view of accounts is not the commercial future of personal banking, what is? Andreasen suggests that the real value will evolve from big data analysis of consumer shopping patterns, payment trends and the application of technology beyond financial services.

As a result, Danske Bank UK is already considering how future revenue sources may be generated outside of its current area of operations.

“We are looking at the periphery of what you would normally call ‘banking’,” he says. “How can we use this technology outside of our business lines, so we can deliver new [revenue] streams.”

He says such areas of interest include “deal comparisons” where customer purchases are monitored against the best deals on the market and consumers are advised where savings can be made.

“You can already see, in e-commerce, search patterns and what value you can deduct from that. This is untapped potential in how we can use Open Banking.”

When asked to appraise his competitors for innovation – both traditional banks and fintechs – he says many UK banks are adopting a “wait and see” approach to protect any damage to their business models of throwing their weight behind new launches which later prove costly.

“You get the whole spectrum, from those that ignore [Open Banking] to those that are experimenting, building up capabilities and are looking at what works,” he says.

“We saw Barclays launching their aggregation at almost the same time as us. HSBC is experimenting with their connected money app, using screen scraping which I’m not a big fan of, and Starling Bank has done some interesting things too.”

Andreasen explains that the label traditionally given to “fintechs” is becoming increasingly tricky for industry figures to define, but warns that it is inevitable that many will fail because of the cost of customer acquisition and a need for consolidation in the market.

“I know how much it costs to acquire a new customer. Getting someone to download and use your app every week is very difficult. Most people don’t want a lot of apps to do their financial stuff.

He concludes that a lot of fintechs have been focussing on the financial technology element when they should be focussed on developing a successful route to market.

“A lot of fintechs don’t have the trust of consumers,” he says. “If you are co-branded with a bank, you get that trust immediately.”