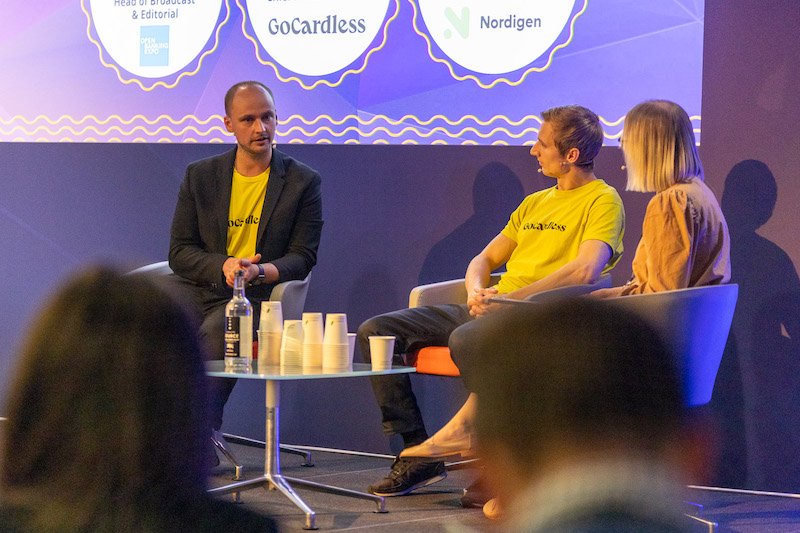 In their first joint interview since the acquisition, chief product and growth officer at GoCardless, Duncan Barrigan, and CEO and co-founder of Nordigen, Rolands Mesters addressed delegates at the Open Banking Expo last month.

Barrigan discussed the aims of the acquisition, and what it was about Nordigen that appealed to the company.

He said: “We started looking across the market. We decided we wanted to bring connectivity into Open Banking and therefore began our journey in looking at the options.

“When I first met Rolands through an investor, it was a real meeting of minds, and we loved so many different aspects of what they [Nordigen] had been doing. In particular, [we were] incredibly impressed with the way they’d built the widest connectivity in the business in 12-18 months from a standing start.”

The pair discussed the timeline of the acquisition, revealing talks were first held in February and March of this year. The deal was closed and announced on 1 July, but then market volatility threatened to hinder progression, with the firms agreeing that they saw “a really big change as they were going through it.”

Mesters elaborated on Barrigan’s explanation of why the acquisition took place, instead relating to the increased number of acquisitions seen over the past few volatile years, and how this almost induced the collaboration between the firms.

He said: “You cannot build a powerful enough platform alone. You need allies, and we found our allies.”

GoCardless has recently expanded into America. The acquisition acts as a boost for Nordigen, enabling the firm to expand its reach into the same regions as its partner. Spanning Europe, North America, and Australasia, GoCardless wants to expand Nordigen’s data API model into the same regions, to fill a gap where the model they are offering is rare.

Mesters commented on Nordigen’s planned US expansion and the role it is set to play.

He said: “Clearly, there is a need for this kind of connectivity product, and one thing we know is how to remove barriers from accessing Open Banking.”