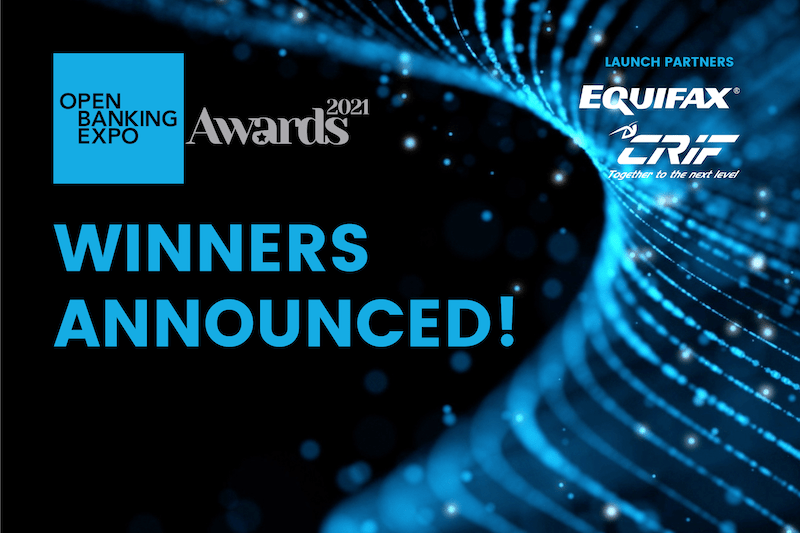 The winners of the inaugural Open Banking Expo Awards have been revealed, celebrating the best and most exciting innovations of the rapidly growing Open Banking space.

After attracting over 120 entries, our expert panel of 24 judges pared this down to an 88-strong shortlist across the 16 categories. Entrants from throughout the industry were attracted, including incumbents, challenger banks, third party providers and fintech.

Many judges remarked that selecting winners from these shortlists was difficult, due to the high quality being seen in each category.

Winners were announced in a virtual event today, streamed live on the Open Banking Expo website and via the Fintech Week London app for the entire community to watch.

The day was made possible by launch partners Equifax and CRIF and event partners Comma, Open Banking Implementation Entity, Qualco and Fintech Week London, during which the event has taken place.

There was entertainment for everyone with comedy hip hop act Abandoman – described as ‘Flight of the Concords meets 8 Mile’ – as host, providing hilarious songs and encouraging the audience to get involved for some improvised renditions.

The awards were designed to celebrate the exciting developments being seen within Open Banking, recognising the innovators, disrupters and visionaries standing out from the crowd.

Among the biggest winners of the day was Moneyhub, which took away three awards. The company was awarded Best Open Finance Innovation and, in a partnership with Mercer Money, won Best Open Banking Partnership (Consumer).

Starling Bank was recognised for the Best Customer Experience Award and Payit by Natwest walked away with the Best Third Party Provider gong.

Kelly Stanley, Co-founder of Open Banking Expo said: “Congratulations to all of the winners! The judges had a tough job deciding who they were as the quality of entries was excellent. Thank you to everyone who took the time to enter, all of our event partners who helped us to make it happen, and to our esteemed judging panel.”

The full list of the winners can be found below:

Best Use of Open Banking Data